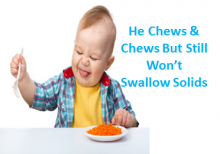 Do you have a child that:

Then you may have a child that is having “Oral Phase” swallowing difficulties. A difficulty to swallow is called dysphagia (dis-fay-ja) but there are many types and causes of dysphagia. To understand dysphagia, it helps to first understand how swallowing occurs.

Swallowing involves four stages. These stage are controlled by nerves that connect the digestive tract to the brain:

There are 4 main stages in the swallowing process:

This article is focused on the Oral stages of swallowing. It is a common issue for many children attending the SpeechNet Infant and Feeding Clinic. In the Oral stage children need to be able to bite, chew effectively and then the tongue forms the food into a “ball” (a bolus) and moves it into position ready for a swallow. This phase is voluntary meaning people have control over chewing and beginning to swallow. Some common problems at this stage of the swallow are:

The role of the speech-language pathologist that has experience in paediatric dysphagia is to assess the factors that may be impacting on the swallow process and assist in developing a management plan.

Let’s look at just one example where the child was “chewing” and “chewing” but seemed to take forever to actually swallow the food. He often needed several effort-able swallows to get a single mouthful down.

1.First of all his bite was adequate however his chew was inefficient.

He used up and down jaw movements in attempt to chew foods such as carrots, meats or apple. However these types of foods really need a grinding or rotatory chew movement to get them ready for a swallow. Hence he was doing “lots of work” that made it look like he was chewing forever however the food was not actually being processed at all. He required assistance to learn a more mature form of chewing.

2 He had poor tongue movements which made it impossible for him to move food from his cheek pockets to his teeth and he could not use his tongue to form the food into a ball (bolus) for swallowing.

Food would fall into his cheek pocket and he could not sweep the food out and place it back on his teeth where he could chew it.  The food was scattered all over his tongue and cheeks. As he could not gather the food into a ball (a bolus) he could not get a clear swallow and kept swallowing the tiniest amounts of food as they randomly moved to the back of the tongue. Food needs to be moved as a “small pile” so a swallow can be triggered. Consequently the swallowing was very ineffective with significant amount of residue being left on his tongue meaning each mouthful was taking such a long time making his meals go on and on. Even after 5-6 swallows per mouthful the tongue was still coated with food. Often he would drink so much water to try to “wash it down” he no longer felt hungry.

In the photos below you can see the food is all over his tongue. Using photos of his tongue and demonstrations of chewing and bolus formation he genuinely said “How do you do that! How do you get it all together in a ball like that?”  The therapy involved using tongue exercise and techniques to assist him to learn how to form a bolus of food so that he could increase the efficiency of his swallow. The last picture clearly demonstrates the huge improvements he made!

Tongue movements and awareness of tongue movements within his mouth was a key element to helping him learn how to swallow effectively. Using resources such as the Online Mr Tongue Story greatly assisted him!

It is recommended that if you have concerns about your child’s swallowing skills that you should contact a speech-language pathologist experienced in paediatric dysphagia and feeding issues. 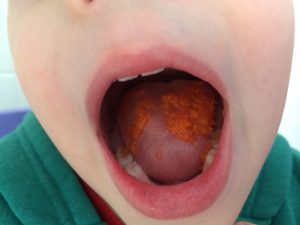 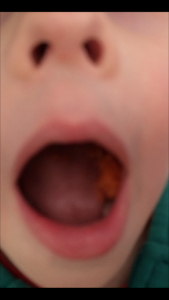 Formation of food into a ball (a bolus) allows an efficient swallow. 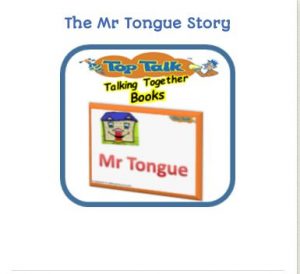