What are Phonological Processes?

Child Speech Development is based on Articulation (physically being able to say a sound) and Phonological Processes. 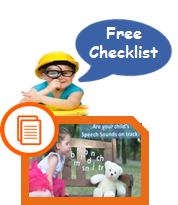 For example, a lot of 18 month old children do not have the control over their tongues and lips enough to say the /t/ and the /r/ sound together in words like “truck”.

Instead they will use a phonological process such as “cluster reduction” to simplify the /tr/ cluster. This means they may reduce the /tr/ cluster to single sounds. The single sound may be the /t/ sound, or even a /f/ sound, instead of the /tr/ sounds. We all have probably heard a young child that has not mastered mature speech unintentionally say “truck” in a cringe worthy way!

​Do all children use all phonological processes?

sound patterns that ALL typically developing children tend to use as their speech develops (e.g., 18-24 month old children often leave off the last sound in a word such as “ba_” for “bat”.

sound patterns that would be considered atypical as most children will never or rarely use these processes. These types of processes are considered warning signs of speech disorders (e.g., leaving off the first sound in a word such as “_at” for “bat”).

A process called Word-Final Deletion is one example of a syllable structure phonological process. Example: “bed” is said as “be_”.

Syllable structure Phonological Processes may also cause syllables to be repeated. Reduplication is an example. Example: “water” is said as “wa-wa”.

A process called Pre-vocalic voicing is where a “soft’ sound (e.g, p, t, k) is substituted by a loud sound (e.g., b, d, g) at the beginning of a word before the vowel sound. Example: “key” is said as “gey”

What phonological processes are expected at the different ages.

There are developmental milestone charts that show what phonological process are appropriate at different ages. A FREE copy of such a chart is part of our Speech sound Developmental Checklist download.

​However, it can be very difficult for parents to work out exactly what phonological process a child is using.